This October I had the opportunity to go at the Velovity conference in London (https://conferences.oreilly.com/velocity/vl-eu). The exact title of the conference is “Build and maintain complex distributed systems”. That’s an ambitious subject. The event had been suggested by a customer who went to one of the US editions and found that it was a brilliant event, both in terms of DevOps subjects covered and in terms the attendees & networking. So here I am, back in London, for 4 days of DevOps and cloud talks.

I have started the conference with a special 2-days training on Kubernetes, by Sebastien Goasgen (@sebgoa)

The training was really intense, as Sebastien described many standard objects and tools of the platform, as well as a few custom options that we can use. We played with Minikube on our laptops, which is a really great way to have the experience of a Kubernetes cluster, in a small box. It was really packed, and we had to rush to keep up with Sebastien’s tests and labs, even with his Github repo containing most of the scripts and K8s manifests. I came out of those days a bit tired by all the things I had learned and tested, and a long list of new functions and tools to try, new ideas to explore etc, it was immensely fun, thank Sebastien!

The conference itself was rather overwhelming, and a big surprise for me. I am used to large conferences like Vmworld or Tech-Ed where you get the good word for the year to come from an editor and its ecosystem. Most of the sessions in those are obviously diving into the products and how to use them.
At Velocity, almost all the keynote speakers were somehow working in research, or such bleeding edge domain that it might not even exist yet. I loved being presented with what might be happening, and by people who are scientists at heart, not just marketing infused with a light touch of technology. Moreover the sessions themselves were mostly feedback on the speakers own experience on a specific domain/issue/subject. Usually they are not into a particular tool or software suite, but rather on how to make things work with DevOps and large distributed systems.

Overall, I I really enjoyed this conference, because it very well organized, and small enough to be a human experience. As we have four days with the same group of around 400 people (227 to this day according to the attendee directory), in a rather small area, you cross path often with the same people, and it makes it easy to start conversations. Also they came up with a lot of ribbons that you can attach to your badge, to let other know what you are here for : 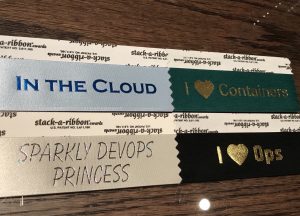 I was used to much larger conferences, where I always found the networking a bit difficult, if you did not know a few people beforehand. In Velocity’s case, it is so easy, you have only a handful of attendees and speakers, and you can meet everyone informally, during lunch breaks or just by asking. It came as a surprise for me to able just to chat with some of the speakers that have impressed me, like Juergen Cito and Kolton Andrus just by going and sit with them at a lunch table.

I’ll probably write about what I learned and took away from this conference in the near future, so stay tuned!