It has almost been a year since my first Worldwide Partner Convention organized by Microsoft in Toronto.

At the time, I wanted to share some insights, and some tips to survive the week.

Before WPC, I attended multiple Tech-Ed Europe and VMworld Europe, in several locations over the years. WPC is slightly different as it is a partner-dedicated event, without any customers or end users. It gives a very different tone to the sessions and discussions, as well as a very good opportunity to meet with Microsoft Execs.

As it was my first time, I signed up for the FTA (First Time Attendee) program, which gave me access to a mentor (someone who had already attended at least once) and a few dedicated sessions to help us get the most out of the conference.

In the months preceding the event, Microsoft will be pushing to get you registered. They are quite right to do so, for two reasons.

First the registration fee is significantly lower when you register early. So if you are certain to attend, save yourself a few hundred dollars and register as soon as you can. Note that you may even register during the event for the next one.

Second, the hotels fill up very quickly, and if you want to be in a decent area, or even in the same place as your country delegation, be quick!

A few weeks before the event, I had a phone call with my mentor, who gave me some advice and opinion, as well as pointers on how to survive the packed 5 days. This helped me focus on the meetings with potential partners, and meetings with microsoftees, rather than on the sessions themselves. More on that subject later.

During that period, you are also given the opportunity to complete your online WPC profile, which may help get in touch with other partners, and organize some meetings ahead of time.

You also get the sessions schedule, which let you organize your coming days, and see what the focus is.

I had the surprise, a few days before the event, to learn that we had “graduated” in the Microsoft partner program, from remotely managed to fully managed. So we had a new PSE (Microsoft representative handling us as a partner) which was very helpful and set up a lot of meetings with everyone we needed to meet from Microsoft France. This helped, for a first-timer, to be guided by someone who knew the drill.

I was very excited to get there, and a bit anxious as we were scheduled to meet a lot of people, in addition to my original agenda with many sessions planned.

I’ll skip the traveling part and will just say that I was glad I came one day early, so that I had time to settle in my new timezone, visit a bit and get cointed omfortable with the layout of the city and the venue.

I will not give you a blow by blow recount, but I will try to sum up the main points that I found worthy to note.

The main point, which I am still struggling to define whether it was a good or bad point is that we met almost only people from France, microsoftees or partners. I was a bit prepared for that, having heard the talk from other attendees, but it is still surprising to realize that you have traveled halfway across the world, to spend 5 days meeting with fellow countrymen.

There some explanation to that : this is the one time in the year where all the Microsoft execs are available to all partners, and they are all in the same place. So it is a good opportunity to meet them all, at least for your first event. I may play things differently next time.

Nevertheless, we managed to meet some interesting partners from other countries, and started some partner-to-partner relationships from there.

I did not go to any sessions, other than the ones organized for the french delegation. These were kind of mandatory, and all the people we were meeting were going there too. But I cancelled all my other plans to watch any session.

I did not really miss these technical sessions, as I work exclusively on cloud technologies, which are rather well documented and discussed all year round in dedicated events and training sessions. But on some other subjects, technical or more business/marketing some sessions looked very interesting and I might be a bit more forceful to attend those next time.

I have attended the keynotes, which were of various level of interest and quality. They are a great show, and mostly entertaining. The level of interest is different for every attendee, depending on your role and profile.

What I did not expect, even with my experience of other conferences, was the really packed schedule. A standard day was running like that :

You may also insert into that schedule a breakfast meeting, or a late business talk during a party/event. 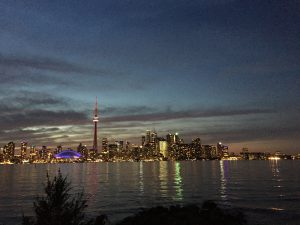 A word on the parties/events : some countries organize day trips to do some sightseeing together. Niagara Falls are not far from Toronto, so it was a choice destination for many of them. We had an evening of BBQ on one of the islands facing Toronto, with splendid views of the city skyline at sunset. Some of the parties are just diners in quiet places, some other are more hectic parties in nightclubs. The main event is usually a big concert, with nothing businesslike, and everything fun-oriented!

There are a few particulars to that event, mostly linked to Microsoft organization and fiscal year schedule.

The event is planned at the beginning of the year for Microsoft. This means that microsoftees get their annual targets right before the event, and start fresh from there.

The sales people from MS also have a specific event right after WPC in July, which means they are 120% involved in July, and will get you to commit on yearly target numbers and objectives during the event.

To top that, August is a dead month in France, where almost every business is closed or slowed to a crawl. That means that when you get to September, the year will start for good, but the Microsoft will already be starting to close its first quarter!

Remember to wear comfortable shoes, as you will walk and stand almost all day long. Still in the clothing deprtment, bring a jacket/sweater, as A/C is very heavy in these parts. We had a session in a room set at 18°C, when it was almost 30°C outside…

The pace of your week may really depend on the objectives you set with your PSE. Our first year was mostly meeting with Microsoft France staff. Next year may not be the same.

And obviously, be wise with your sleep and jetlag, those are very long days, especially when English is not your native language.

This year the event will be hosted in Washington DC, in July, and it has been rebranded Inspire.

I would not specially comment on the name, but anything sounds better than WPC 🙂 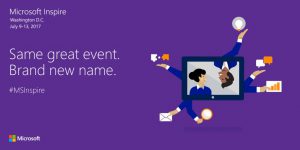